About a year ago we ran an article on Brent Keyes and his ongoing transformation. In 2009, at the age of 28, Brent finally decided that “fat, drunk and stupid was no way to go through life.” Since then he has lost over 100 pounds, traded in his C-PAP machine and beer belly for steak and veggie dinners and six pack abs and become a voice of inspiration for a growing number of people. He did this and you can too. 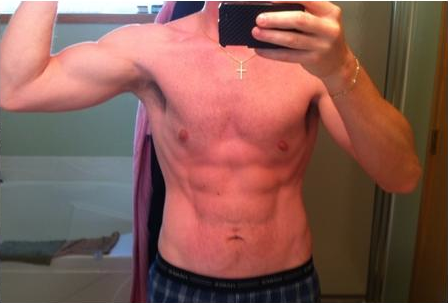 Recently Brent’s story was featured on Mark’s Daily Apple, outlining his path to a new lease on life. If you compare the pics of Brent in his first article here to his most recent ones in the MDA article it’s easy to see that he’s never stopped making progress. Most striking of all, perhaps, are the bloodwork numbers from his physical checkups at the doctor.

A significant thing is that what Brent is doing in order to get these results is directly contrary to mainstream medical and dietary advice. He never counts calories, typically skips breakfast, none of the foods he eats even have pictures of cartoon hearts on them and his meals all center on meat, vegetables and ample quantities of saturated fat and cholesterol.

Even Jim Gaffigan’s friend bacon, which is vilified by anyone dictating official nutritional guidelines for the fattest country on the planet, is a regular item in his diet.

As Brent’s story has spread, there has been an increasing flood of emails from people hoping to get results like him asking for specifics on how exactly he trains and eats. It’s a surprisingly uncomplicated process. Knowing what to do is almost never as difficult as actually doing it.

Below is a short interview with Brent, going over his current lifestyle as far as food and training. It comes down to simple concepts. Eat meat and vegetables, skip the sugar, avoid grains. Then move your body the way it was designed to move.

“Well, until recently I was doing a 16 hour fast with an 8 hour eating window, doing a shot of BCAA‘s in the morning instead of breakfast. The most recent numbers you see in my bloodwork are the result of that. A few weeks ago I started doing a 40 gram whey protein shake in the morning with a scoop of coconut oil for breakfast, with occasional hard-boiled eggs as well because I’m upping my overall food intake in an effort to add some more muscle. I’ve gotten to the point that I’m not as concerned with fat loss anymore.

Twice per week, in addition to my Monday, Wednesday and Friday Barefoot workouts I’m now doing short fasted (except for BCAA’s) interval sprint sessions in the morning and doing the same shake a little bit later. It’s low volume stuff; a single round of tabata sprints on Tuesday mornings and a gradual progression of 200 meter sprints on Thursdays. I sprint 200, wait for my HR to get below about 120 and repeat for four total reps. As you outlined, I’ll wait a few weeks to add some reps to that and then start over with a longer interval. That seems to be working well to allow me to stay lean and even lose a little more fat while adding muscle from the extra food.

Lunch for me is usually leftovers from the night before. All of my meals consist of a lot of fat. Coconut oil, olive oil, real butter, etc. They also contain a ton of vegetables (usually in olive oil) and a healthy portion of some form of dead animal. I eat a lot of red meat (grass fed beef) with chicken, fish, and pork thrown in there as well.

One of my favorite meals to make is a half pound grilled hamburger with two eggs fried in butter on top with a few strips of bacon.

We buy coconut oil by the gallon at our house because we eat so much of it. I just had a snack last night consisting of cabbage, hard boiled eggs, avocado, bacon, and dried cranberries all mixed together. To make it a salad consistency, we made homemade mayo from left over bacon fat. Yes, that was an 8 PM snack!

The amount of saturated fat that I eat, according to the FDA, should have me dead by now. Obviously, that is not the case.

Dinner last night consisted of a baked salmon filet topped with almonds with a cabbage salad as a side. I always keep bags of almonds in the cupboard for a snack, along with hard boiled eggs in the fridge. I eat roughly two dozen eggs per week.

You will not find any margarine or fake butter in our house. All we use is real butter. It’s easy to find good quality grass fed butter, and the flavor goes so well with things like eggs.

I eat some dairy, occasionally having things like full fat cottage cheese, greek yogurt, cheeses or cream but I don’t drink glasses of milk like I did years ago. It’s all in small quantities.

I eat like this about 95% of the time, though I do usually have some ice cream on Saturday nights. The thing is that after eating like this for a while I really don’t have cravings for junk food anymore, so it’s not much of an issue to stay away from it. My body is happy with real food instead. Rather than worrying about calories, I eat when I am hungry and eat until I am satisfied.

For peri-workout nutrition I’ve gone through several strategies. Earlier in this process I didn’t tolerate carbs as well and was more concerned about fat loss as a primary goal so I kept sugar to a minimum, even during workouts. I stuck to things like powdered BCAA’s or Biotest’s Anaconda or Mag 10.

Currently I’m doing a 40 gram whey shake an hour before my workout, then a higher carb peri-workout drink (along with plenty of BCAAs) during the workout, and usually another shot of aminos post workout. Usually dinner isn’t too long after that and I’m eating a big plate of tasty dead animal and veggies.

In order to accomplish what I set out to do, a few things had to happen. I needed to clearly define how I wanted my body to perform, and what exactly I wanted it to look like. Then I learned as much as I possibly could (and continue to do so) to get a basic understand of what exactly is and is not healthy. Then before any particular food goes into my mouth, I asked myself… will this get me closer or further away from my very specific goal. If it does, great. And if it doesn’t, take responsibility for it. Only I am responsible for what I see in the mirror every day.

I have always said: Find a person that has what you want and stick to that person like glue. Learn from them, eat like them, and train like them. Most people that have already become successful in a particular area of their life are very willing to help others get there as well. This applies to health and fitness goals, as well as any other area of a person’s life.

If I could encourage anyone that is reading this that wants to do what I have done it would be this: Take this journey one day at a time. Or even an hour at a time. Shoot, maybe it’s even one minute at a time. Don’t get bogged down with six months from now, or a year from now. Just keep doing the next right thing. After a while, these “next right things” simply become habit. What I have found is that most people don’t give themselves enough time to truly experience how fantastic it really is to have a healthy, capable body. Once you have it, you will work your ass off to never go back to your old self.

I think people need to just start their quest for health and a better body with the knowledge they already have. I see a lot of people that get ‘paralysis by analysis’ because they think they have to know everything before they start. If all you currently know is to eat chicken breasts and veggies, do pushups and go for walks, then start with that. Learn the rest as you go. It’s kind of like waiting for all of the stop lights to be green before you leave your house. This will never happen, so get started and adjust as you go. Doing something is always better than doing nothing.

Obviously, making the decision to walk into a Barefoot Fitness facility takes most of the guess work out of this. Show up, do the work, listen to the amazing trainers there, and get results. It really is that simple.”