Dr. Ramos is a nephrologist in Denver. He has been training at Barefoot since this spring, and has made outstanding progress. What we didn’t know at first though, is just how far he’s come.

The path required to become a medical doctor is rigorous, and at times, brutal. In the pursuit of being able to one day help others improve and maintain their health, many medical students end up sacrificing their own wellbeing. This is what happened to Phil, and this, in his words, is the story of how it happened and how he came back.

“I graduated from medical school in the year 2000. During college it was easy to work out on a regular basis as a full-time student and with a part-time job. Between the ages of 18-22 it was also easy to get away with eating fast food and binge drinking on a regular basis without gaining too much weight. Even during medical school, when we were taking on an average 30-35 hours of course work during the basic sciences, we still had time to work out, but it was definitely more challenging during tougher semesters and exam weeks. My overall weight and fitness level was stable during this time, but it far from excellent.
Things changed dramatically during my internship and residency. My work and training began to take over every facet of my life. We worked 90-100 hours per week (our salary started at 29K per year) with 2 weeks of vacation per year. Internship/residency, for me, lasted 3 years. Some months we were on-call only twice in a month, while during others were on–call every fourth day. There were many sleepless nights while we were taking care of some of the sickest patients you will ever encounter. This is how we learned: repetition and long hours. This environment tested the most motivated and intelligent of us. There were many break-ups and divorces. Depression was common. Even after eight years of college and medical school, some of us quit.

Working out was a secondary priority. Because I was so exhausted most of the time, my priority was eating and sleeping. I was in survival mode. After working a 12 to 16 hour day (this was a regular work day without being on-call) I was too tired to work out or prepare a healthy meal at home. Thus, I relegated myself to a fast-food dinner at around 9pm in the evening. Then I went to bed at 10pm so I could be in the hospital at 6am. There was no such thing as a weekend. During many months, the days blurred and our sole day off for the week was spent resting and preparing mentally for another cycle of work.

During this time I never ate breakfast. The closest thing to breakfast I would eat would be a bagel or donut during our morning report conference. We would have lunch provided for us and was usually a sandwich with chips and a cookie, or pizza or Chinese food. Dinner while on call was not usually healthy, if you even had time to eat. Sleep was at a premium. While on call, it was common to work thirty hours straight. The longest I went without sleep was 42 hours. And, I woke up six hours later to go back to work. I once actually fell asleep in my car at a red light and was honked back to consciousness.

During my third year of residency I weighed nearly 210lbs (I am just under 5’9”). During one of my outpatient rotations, I had a nurse measure my blood pressure. It was 155/90. I was astonished because I always had normal BP. She rechecked it several more times, and it was the same. Blood work showed that my HDL (good cholesterol) was 29, which is a negative cardiac prognostic factor (a low value of good cholesterol is the same as having a high bad cholesterol (LDL) value). I had a 36 inch waist. I had two of the five traits of the Metabolic Syndrome (low HDL and hypertension), with only three needed for diagnosis. Metabolic syndrome is highly associated with the development of diabetes, cardiovascular disease, chronic kidney disease and death. I was 30 years old.

During the next year I served as the chief medical resident of our residency program, and my schedule was very nice. No call and weekends off for a year. I lost about fifteen pounds and was about 195 pounds prior to marrying my wonderful wife. However, my break was short-lived. I began my specialty fellowship in kidney medicine in 2004 and it was busier than my internship. I again began eating poorly and sporadically. More sleepless nights and a lot of stress. Exercise was a secondary, even tertiary, priority. I was 32 years old.

After my first year of fellowship, I started a two year research program. The schedule allowed for more time to work out. In order to lose weight, I began running half marathons. I did approximately 14 half marathons in less than a two year span. I did lose weight, and was down to about 190lbs. I thought I was pretty healthy, although I sustained some injuries that forced me to stop running for a while.

My research department did a lot of nutrition research and, one day, I had my body-fat measured with a DEXA scan. I had nearly 30% body fat! I surmised that by running all those half marathons and eating primarily a carb-based diet I lost fat, but also muscle. Overall, I had more fat than perhaps the weight scale told me. I was devastated. I was 33 years old.

One day I took my wife to a job interview. While she was interviewing, I walked to the next door establishment, a private gym with personal training. I met a personal trainer who signed me up for a free evaluation. Starting at that time, I embarked on a new journey that taught me a new way to work out and eat. I began doing squats, deadlifts, kettlebells, medicine balls and lots of compound movements that were new to my body.

I had not squatted since my college days. My work-outs not only changed, they evolved. I began eating breakfast every morning without fail. My protein intake increased and I started to drink 1-2 protein shakes per day. I started eating every 2-2.5 hours with 5-6 small meals per day. After 2 years of personal training and a focused nutrition plan, I weighed 175lbs with 13% body fat before I moved to Colorado to start my new job in private practice. I was 35 years old.

After nearly a year in Denver, through word of mouth, I was introduced to Barefoot Fitness. My workouts have again evolved. Craig and Marshall have definitely raised the bar for me. Earlier this year I could not do more than one pullup. Now, I can do twelve reps at one time. At first, I hated kettle bell swings. Now, I love them. I remember seeing people do the rope climb, and I told myself that I could never do it. Last month, I did my first rope climb to the top, and I was so pumped! I turned 37 years old last month.

Now, my HDL is 59 and I have normal blood pressure. I have a 30 inch waist and weigh about 180lbs. I enjoy my new lifestyle of functional fitness and strict nutrition. I can safely say I am in better shape and look better now than I ever did during my 20’s. It is ironic that we physicians devote so much time taking care of others that we frequently forget to take care of ourselves. I think that we should “practice what we preach” regarding living a healthy lifestyle. Now, I think I can do that. I look forward to “raising the bar” more in the future, and when I turn forty, feeling and looking like I am twenty.” 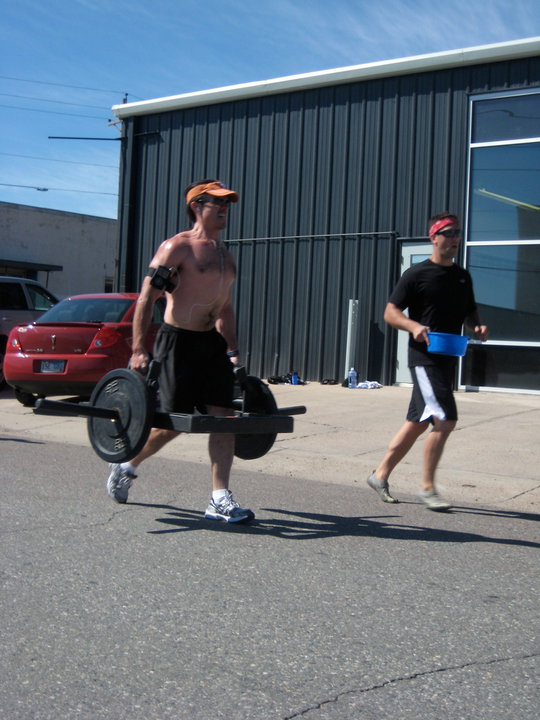