In my early stages of learning to eat healthier, I started the Paleo diet. I went cold turkey and adopted this as my new healthy. I was so into it! People would often get in touch with me to help them in their Paleo journey. I still seem to carry around the Paleo Girl title.

If you aren’t familiar with Paleo, here are the very basics: Remove dairy, grains, processed foods, sugar, and legumes. Your diet revolves around protein, fruits, veggies, nuts, and seeds.

I’m not writing this to persuade you one way or the other. I have had several conversations about this recently, and I want to share my experience because it applies to many restriction-based plans. Keep in mind that we’ve all got a unique path and mine may not look the same as yours, but I hope there are some useful nuggets here for you.

I learned a lot about myself during my hardcore paleo time. Many good changes came from it.

So why did I stop?

A lot of cons came with the pros. And that is what I want to share with you.

My old way of eating could best be described as “college kid trying to adult.” Many meals I made were heavily processed. Some of my menu staples were Hamburger Helper (because it seems adultish) and frozen pizza (but not the cheap Tony’s, we are adults and buy the thick crust stuff now).

Lunch was coupled with chips and soda. I would buy fresh fruits and vegetables (adulting!) and watch them rot.

When I did cook a meal, most of the time a can of cream-of-something soup was a base. Or it was ladened with cheese/sour cream/butter. One of the main ingredients in salad was mayo, or marshmallows if it was fruit salad. If you grew up in the midwest, you know what I mean.

My mid-twenties brought something new with them…a metabolism that suddenly didn’t allow me to eat whatever I wanted anymore. I needed to make a change.

I tried to find what worked. Healthy Choice soup, SlimFast drinks, and lots of Special K cereal. (Remember the Special K diet?) I also tried many other strange diets. Cabbage soup for a week, baked potatoes and green beans for a week, etc, etc.

As time went on, I kept trying and adding more fresh food like yogurt or fruit. I was slowly getting a “little bit better” than before.

During this time, Kelli (owner of Barefoot Fitness in Spearfish) introduced the Paleo diet to me. At first I thought the whole thing seemed crazy. No bread, no pasta, no milk or cheese and no peanut butter! I mean, what the heck do you eat? After seeing how it changed her, we decided to give it a try.

I decided to do a 30-day trial of the Paleo diet.

I loved it! I felt great. I saw less bloating, stomach discomfort, and I was getting leaner. Whoa! This Paleo thing is legit. So I adopted this way to cook and eat.

It threw my world as I knew it upside down. But I kind of liked the challenge. I was eating more fruits and vegetables than ever before. I learned how to really cook – not from a box.

I experimented with different foods and discovered new things I liked. My world opened up to new flavors and spices. And I learned that the base of all meals isn’t cream soup.

I found I don’t tolerate dairy or wheat well. Don’t get me wrong, I love dairy, but it does not love me back. In fact, it bites back. While it isn’t entirely wiped away, I am choosy about whether a food is worth the payback.

Removing these was major. Not only because it was hard at first, but because I finally realized that all the discomfort I was feeling wasn’t normal. And once I knew how good I could feel, there was a shift in my perspective. My cooking style changed and I enjoyed feeling better. More than I enjoyed adding cheese to every meal. Big time pro.

What about the other stuff? C’mon! Sometimes I like to eat natural peanut butter. Or real rice instead of cauliflower rice. I know the “rules” say I can’t have them but they don’t make my stomach angry. So I started making my own rules.

“I eat paleo except for sometimes peanut butter and sometimes rice. Sometimes I use oats, or corn starch, or soy sauce. I like beans in my chili, and I like potatoes sometimes…”

My “all in paleo” became “all in except…”

But guilt would set in. It felt like I was losing against the rules. I look back now and think, “how silly!” Instead of tuning in to my own body and doing what works best for me, I framed everything around an arbitrary set of rules.

I love cooking and experimenting in the kitchen. But as a “paleo person” I also spent too much time and effort on meals just to follow the rules. Usually, this was attempting to recreate a favorite meal and hoping it would taste the same. It almost never did.

And let’s be real. Almond flour doesn’t belong on or in everything. It doesn’t make a good filler in meatloaf or the best coating on chicken or fish. It has its place. But that place isn’t everywhere.

And what about bacon? Bacon is undeniably delicious. And Paleo people love it and add it to everything. “You can be paleo and eat a pound of bacon every day!” I’m absolutely not recommending you stop eating bacon. I’m still pro-bacon, but more of my protein comes from lean sources.

So why exactly did I break up with Paleo?

In an effort to be healthier, I added stress by trying to follow a list of rules that didn’t necessarily apply to me. Cooking, something I truly enjoy, became less fun. I began to vilify carbs. I attempted to “paleoize” favorite indulgences. How is this healthier?

I was on the right track when I started creating my own rule book. By taking the information I had about myself, (gluten and dairy sensitive), I started to adapt my diet around that.

I  wouldn’t be where I am now, if I didn’t go through that “all in” phase. I gained a lot of skills. I was able to abandon familiar comfort foods for a while, try new things, and practice self-discipline. I learned how to pay attention to my body and how it interacts with different foods.

Through practice and trial and error, I figured out what worked for me and what didn’t. I became efficient at menu planning and food prepping.  My kitchen skills improved to make cooking more efficient. But this all came from experience, not from a specific plan.

The transition from strict Paleo to today comes down to basic math. I added in what worked for me from Paleo, and subtracted what didn’t to make it my own. 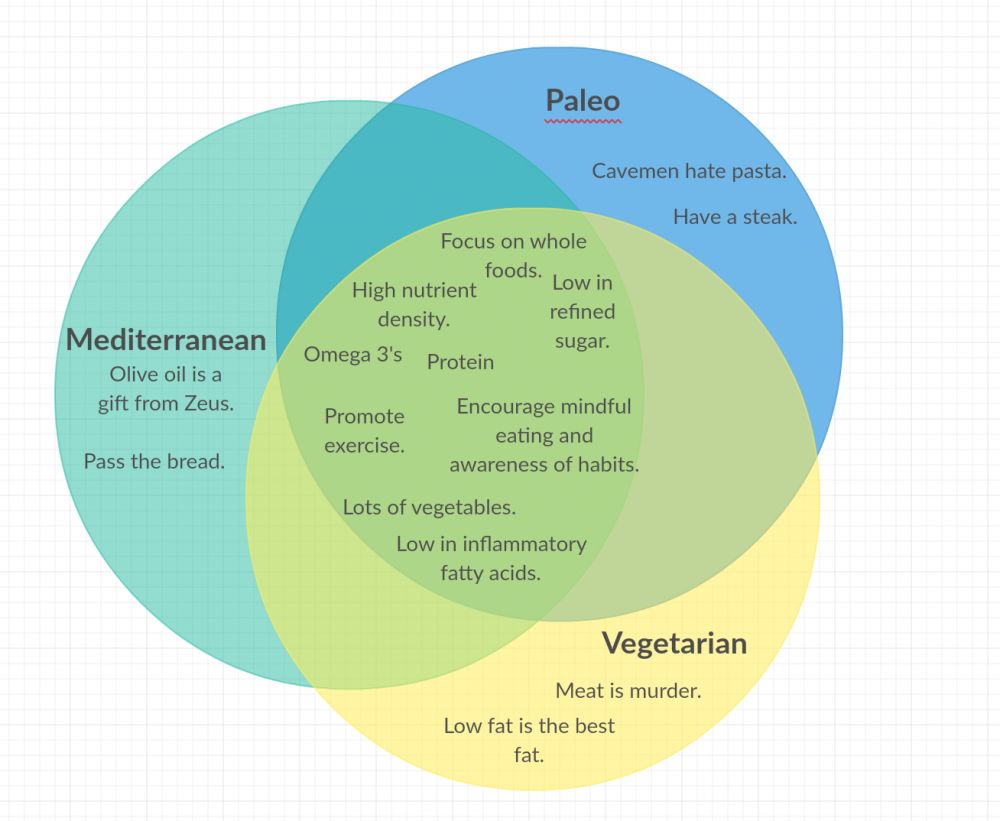 Notice the common denominators in this diagram.

Most restrictive diets have many of the same things in common. It’s not about picking the right set of nutrition rules. It’s more about developing consistent behaviors centered on core principles, like the things that are in the middle of this diagram, shared by any common “diet.”

I broke up with Paleo because I didn’t need it anymore. It took me through an important learning curve, but it was time to move on. I no longer needed the rigid framework. The goal with any diet or meal plan is to no longer need it.

What do I do now? I eat foods I like and that make me feel good! (strange concept right?) A balance of real food, that I eat slowly, and to 80% full. And I am leaner now than I ever was as a younger paleo-ite. It looks something like this:

Fruits and vegetables – an assortment of them!

Fats – from high quality sources like nuts and seeds, avocado, wild-caught fish and whatever comes along with my protein sources

Carbs: Yup, these too. Sources like quinoa, brown rice, steel cut oats, and beans. And sushi in a bowl like pictured above

And I have some “relaxed” foods. You know, ice cream or a big fat burger. But I enjoy these things, without guilt, because I am the creator of my own rules now.

This is my unique journey. It may look different for you. No matter the exact path you take to get there, you can’t skip the difficult middle part of trial and error. The journey is an essential part of getting to the destination.